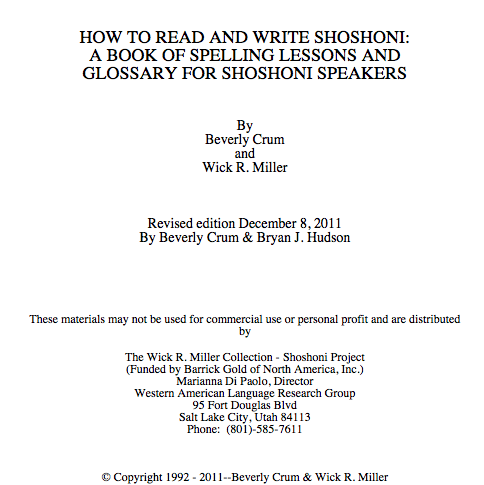 In 1988, Wick R. Miller and Beverly Crum produced a set of writing lessons called “How to Read and Write Shoshoni: A Book of Spelling Lessons and Glossary for Shoshoni Speakers.” They revised it in 1992. It was revised again in 2011 by Beverly Crum and Bryan J. Hudson.

The book contains 25 lessons and comes with three audio CDs that accompany each of the lessons in the book.

This book is designed to introduce, in a step by step fashion, the sounds and letters of the Shoshoni alphabet.  Most of the lessons aim to practice spelling either of parts of words, whole words or sentences.  Exercises in some lessons focus on reading.  After the 25 lessons there is a section that describes the spelling cards which give even more practice in reading and writing Shoshoni words.

“This book is designed for people who want to learn to read and write using the [WRM] Shoshoni alphabet.  It is not a pronounciation guide, nor a book to learn to speak Shoshoni.  It will not be of much use to you unless you already know how to speak or at least understand Shoshoni.

If you can read English, it won’t take you very long to learn to read and write in the Shoshoni alphabet.  All of the letters but one are letters also in the English alphabet.  This is because the letters are taken from the Roman Alphabet, the letters used in the alphabets for most of the languages of the world; for example Spanish, German, Polish, Turkish, Vietnamese, and many others.  However, the Roman letters are pronounced in somewhat different ways in each language.  You don’t pronounce words written in Spanish as though they were English words, nor English words as though they were German.  The Shoshoni alphabet also must be pronounced in its own way, not like English.  So when reading the Shoshoni words, say them in the Indian way; don’t say the words as though they were English, because if you do they won’t make much sense.

The Shoshoni words and phrases used in this book come from a number of different varieties or dialects of Shoshoni, as it is spoken in Nevada, Utah, Idaho and Wyoming.  Since the language changes a little from place to place, you may find that you use different words, or that you use the same words, but pronounce (and spell) them a little differently.  For example, in some places the word for ‘blanket’ is wika, in other places it is ehe.  Or maybe you say sonno for ‘lungs,’ while others say sonko.  But even if you use different words, or the same word with a slightly different pronunciation, the same alphabet, the Shoshoni alphabet, can be used.  The only exception is the Shoshoni which is spoken in California, which has a couple of extra letters not found in the Shoshoni further east and north.”

Request How to Read and Write ShoShoni