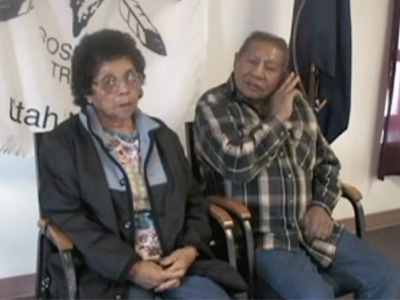 Florence Steele and Lee Moon tell the Goshute creation story about the coyote and the duck ladies. They also share the origin of the name, “Goshute.” They explain how different parts of animals were used as tools, and which plants were used as food. Florence and Lee also describe some of the dances and ceremonies of their Ute neighbors as well.

Florence Steele and Lee Moon are Goshute from the Goshute Reservation. Florence and Lee start their oral history by telling the creation story of Coyote, and how Coyote brought over the Native Americans to the North American continent. They also refer to the Goshute as Gosciuta (Go-see-oot-ta) which roughly translates to ash paint which in extension refers to the aivee (white chert) in the water. They also speak a little about the traditional foods and that were hunted and gathered. Florence also speaks about how her mother made rabbit blankets. They end their story by speaking about the Bear Dance and how it came from the Utes and why the Utes performed the dance and songs as they did.  (GBC VHC Description, 07/31/2017)